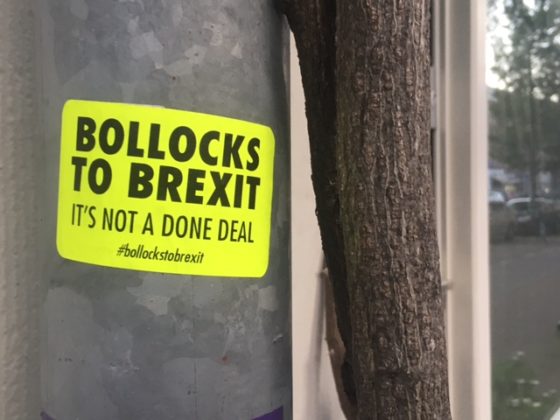 An anti-Brexit sticker on a drainpipe in Amsterdam. Photo: DutchNews.nl

Britain will face difficulties doing business with the Netherlands if it leaves the EU at the end of this month without meeting its financial obligations, Dutch foreign minister Stef Blok hinted at to the Financieele Dagblad in an interview.

‘We will of course keep the UK to its obligations,’ Blok said. ‘An unpaid bill between two neighbours is not helpful.’

If Britain crashes out of the EU without a deal, as prime minister Boris Johnson is heading for, the two countries will have much to sort out, Blok said.

‘How will we make sure our people and our companies can continue to cross borders, that our police services can phone each other if a suspect has crossed a border?’ Blok said. ‘Then the first question will be “shall we pay our bills”?’

Time to reach an agrement is running out Blok said. ‘I know how high emotions are rising in the UK,’ he said. ‘But we remain neighbours. And worldwide, your neighbours are unavoidably your most important trading partners.’

A no-deal Brexit will cost the Netherlands at least €34bn up to 2030, the equivalent of €164 per resident per year, according to calculations by economic research bureau SEO for economics magazine ESB.

Talks between British and EU officials in Brussels came to a standstill on Wednesday after EU negotiator Michel Barnier told the European parliament: ‘We are not really in a position where we’re able to find an agreement’.

DutchNews.nl has been free for 13 years, but now we are asking our readers to help. Your donation will enable us to keep providing you with fair and accurate news and features about all things Dutch.
Donate via Ideal, credit card or Paypal.