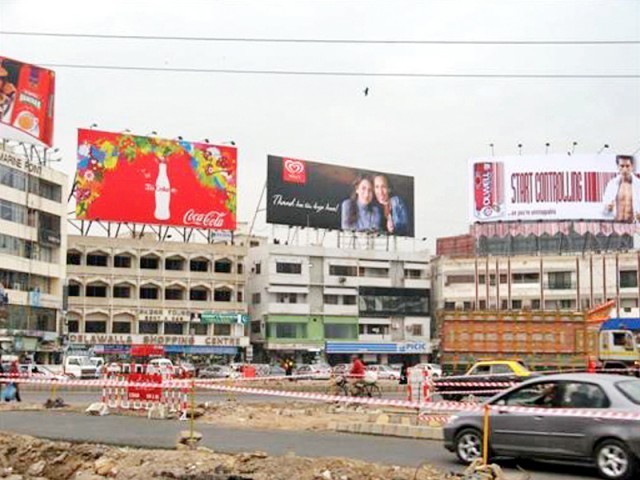 After their counterparts in cities like Karachi and Lahore, residents of the capital, Islamabad, are now coming to terms with the gigantic commercial billboards that are sprouting all over like wild mushrooms in the rainy season. One need hardly be surprised. With all the commercial hype that is threatening to take over our lives, billboards were bound to come sooner or later!

The civilised (?) world has been engulfed by “commercials” of late. Larger than life “ads” are all around; all embracing. Whether one takes to visual media, sports arenas, roadways or whatever you will, what hope does one have of evading the wretched things? Like it or not, commercials have become an inseparable part of life itself. This, apparently, is the price that one is obliged to pay for progress, if progress it is!

Take the instance of television that happens to be the most popular entertainment media of today. The advertising industry shamelessly exploits the vast captive audience this media enjoys. One makes allowances for the financial constraints that make airing commercials necessary. But do they have to take over? One can understand when a popular programme is snuffed out all of a sudden for a “commercial break”. The problem is that these “breaks” are ominously getting longer and more frequent.

In the United States, where commercials have acquired an almost reverent character of their own, popular programmes have been virtually deluged. Viewers complain, with reason, that they are now being obliged to watch a series of commercials, interspersed occasionally by some entertainment, rather than the other way around. The urge to sell — and sell in a hurry — has become all-pervasive. As sales soar, so does the urge to advertise. Newer methods of entrapping the hapless consumer are being devised all the time.

Needless to say, advertising itself is big business. Advertisers make millions in their campaigns to help clients earn more millions. At the receiving end are the poor consumers as they end up footing the bill for the product and the advertising.

Honesty in advertising can hardly be taken for granted. Most commercials, often, are very economical with the truth. Advertisers have no qualms about making outlandish claims just to push up the sales of products advertised. The fact that their claims do not measure up to reality is for them of little or no import, as the end is more important than the means.

And what can one say about the fashion shows organised to sell designer clothing? A selected bevy of svelte fashion models, who after spending years starving and twisting to acquire wispy figures that are hardly the norm by any standards, are provocatively paraded in front of prospective buyers. The joke is that these buyers — all having surplus money to throw around — are actually deluded into believing they would look equally glamorous in the clothing displayed by the wispy models! These are just stray examples. One could go on and on.

And now to the fundamental question that is begging for an answer: is advertising at all justified? The advertising companies would, naturally, have us believe that it definitely is. In justifying their existence on western television, these companies claim that advertising helps afford to the consumer “the right to choose”. The critics argue that commercials make the consumers yearn to reach out for products they could very well do without. Thus not only paying a higher price for these products but also land with stuff they don’t need and wouldn’t buy if it wasn’t for some clever — and misleading — advertising.

All in all, commercials, their negative aspects notwithstanding, are not entirely devoid of positive features, and they do add a bit of glamour to what would otherwise have been a dull and drab existence. What one needs to do is hone up one’s capacity to live with commercials without getting hurt in the process. Easier said than done, though!