Britain is trapped in a political Mexican stand-off today after the EU agreed to delay Brexit but put off a decision on how long for.

Ambassadors meeting in Brussels this morning delayed their ruling until Monday or Tuesday next week – just two days before the Brexit deadline – in order to give Jeremy Corbyn more time to decide if he will back a general election first.

But the Labour leader is continuing to dither, insisting that a No Deal Brexit must have been ruled out and he knows until he knows how long the UK will remain in the EU  before he will commit, amid a backbench rebellion from opposition MPs worried they face a mauling at the ballot box.

Today should have been the day when Britain finally learned its fate from the EU, with leaders due to announce how long Brexit will be delayed by this afternoon.

But that timeline has now been scuppered. European ambassadors today announced they have agreed a Brexit delay – but won’t tell the UK how long it is until next week – seemingly because leaders are waiting to know if the UK is heading to the polls in a general election or not.

In order to win a vote to secure an election Mr Johnson needs the backing of two thirds of MPs – so he would need any motion to be backed by the Opposition party.

It means that decision lies with Labour leader Jeremy Corbyn and his hugely divided party.

Today his position looked less clear than ever as he dithered over the issue on the This Morning sofa.

Boris Johnson dramatically laid down the gauntlet to the Labour leader today, telling him to ‘man up’ and back a vote.

But Mr Corbyn is desperately playing for time amid warnings that agreeing to the snap poll would tear the party to shreds – with more than half his MPs threatening to revolt.

Interviewed on ITV’s This Morning, Mr Corbyn again dodged giving straight answers on how he will respond – as he faces a massive revolt from his own MPs who fear being destroyed by voters.

Mr Corbyn insisted that Mr Johnson would have to come to Parliament and rule out the UK ever leaving the EU with No Deal. That is a higher bar than the party’s previous condition that there must not be a threat of crashing out during an election campaign.

The veteran left-winger also criticised the December 12 date as ‘odd for many reasons’, arguing it was ‘so near Christmas’ and ‘after universities finish their terms’.

Chancellor Sajid Javid accused the Opposition of ‘constant changing of the goalposts in what they want and don’t want’, saying the ‘zombie’ Parliament cannot continue. 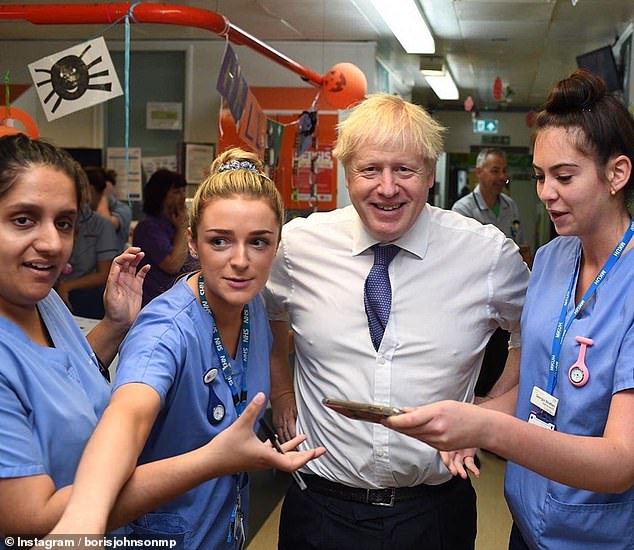 Boris Johnson (today at a hospital in Milton Keynes)  dramatically laid down the gauntlet to the Labour leader last night, saying it is the only way to ‘end the nightmare’. 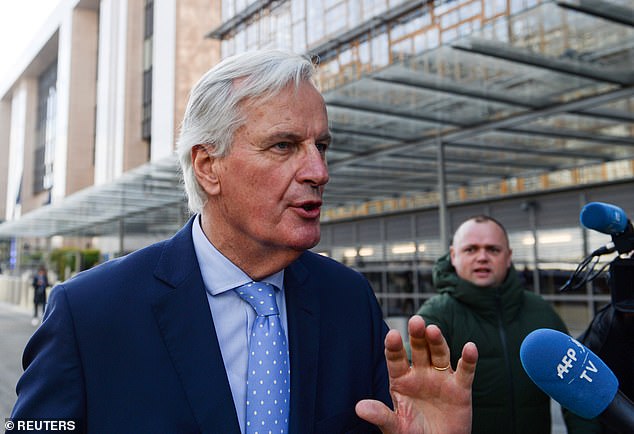 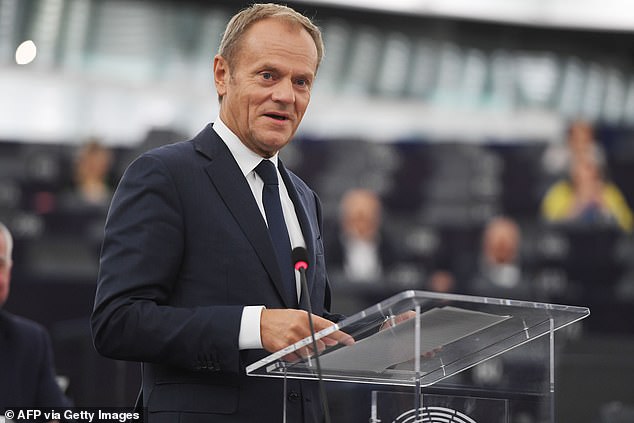 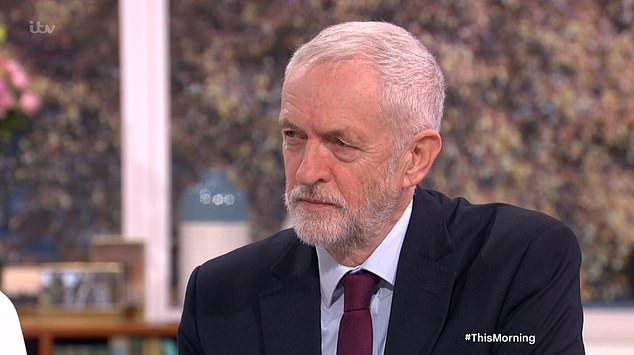 French president Emmanuel Macron is worried that if an election does not take place and Mr Johnson cannot get his deal through the Commons, the three-month extension will be wasted.

The bewildering manoeuvres came after the PM made a bold bid to force a resolution by offering Parliament more time to scrutinise his Brexit deal, in return for the House of Commons approving a December 12 election date.

Friday October 25: The EU had been expected to reveal the length of Brexit delay it will offer the UK. However, there are signs this will be put off until next week.

Next week: The Government will table a motion under the Fixed Term Parliament Act (FTPA) requesting a general election. No date has to be given but he has suggested December 12.

Monday October 28 – November 6: MPs and peers get ‘all possible time’ to debate and vote on the Withdrawal Agreement Bill that he halted after being defeated in a vote on Saturday, with the idea being that a deal is signed, sealed and delivered by that day.

November 7: Parliament is dissolved for a five-week general election campaign. Mr Johnson will be hoping that he goes into that campaign with a settled Brexit deal with which to woo weary voters.

December 12: A general election is held.

He needs Labour votes because two-thirds of the Commons – 434 MPs – has to agree to an early election.

Mr Johnson has already failed twice to secure sufficient support, as Mr Corbyn argued that the threat of an accidental No Deal was too serious.

But there are major doubts over whether Mr Corbyn can bring enough MPs with him even if he does back an election.

In theory, Labour’s 245 MPs should be more than enough to reach the two-thirds threshold, when combined with 288 Tories, 35 SNP and 19 Lib Dems.

But shadow cabinet ministers are doubtful that 100 of the Commons colleagues will endorse going to the country. A recent meeting of the Parliamentary party was said to be ‘unanimous’ in saying that a second referendum must come before an election.

The PM has warned that the government will effectively go on strike if opposition parties deny the call for a national ballot.

The Budget, slated for November 6, has been cancelled as in theory Parliament would be dissolved for the campaign by then.

‘Nothing will come before Parliament but the bare minimum,’ a No10 source said.

‘We will pursue a general election every day from then onwards and do everything we can to get it.’

The source said this would include the scrapping of the Withdrawal Agreement Bill, which is required to ratify the deal Mr Johnson has thrashed out with the EU.

Mr Johnson was compelled to ask for a delay to his ‘do or die’ Brexit date of October 31 by the Benn Act, after he failed to get approval for his 72-hour timetable for passing the legislation to implement the deal.

Mr Johnson said it would be ‘morally incredible’ if opposition MPs refused to go along with his plan now. 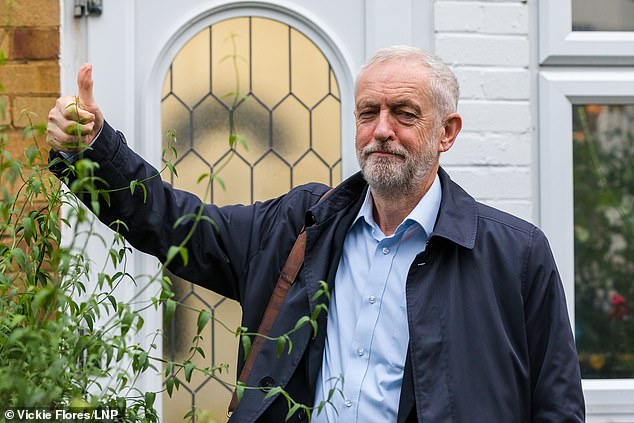 Interviewed on ITV’s This Morning, Mr Corbyn again dodged giving straight answers on how he will respond – as he faces a massive revolt from his own MPs who fear being destroyed by voters 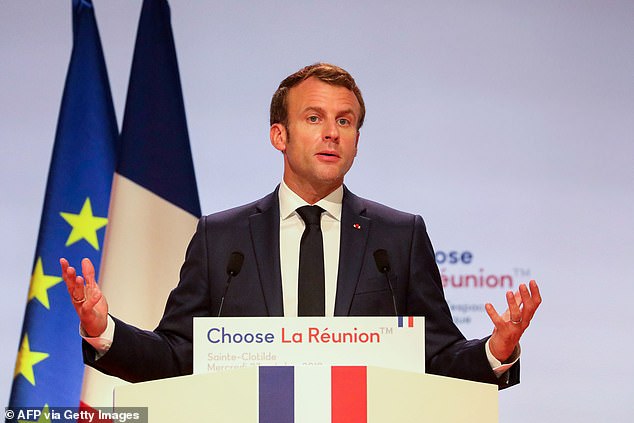 Under his new plan, Parliament would get until November 6 to debate and vote on his deal.

Then Parliament would be dissolved, paving the way for the first December election since 1923.

Will Christmas poll be a Turkey?

Cold weather, nativity plays and booked-up church halls are among the many challenges facing a Christmas election.

Boris Johnson’s plan to go to the polls on December 12 could hinder campaigning and voter turnout due to limited daylight hours and clashes with office parties.

And the snap poll will be a cause for concern for the superstitious among us – as the result will be announced on unlucky Friday 13.

The Tories may also be more likely to suffer from a December election, since the cold disproportionately affects older voter turnout, a key demographic for the party.

The December poll could also cause confusion and delays as officials will be forced to use two different electoral registers to manage voting.

The electoral roll is updated annually on December 1, but polling cards would need to be sent out in November – meaning polling card numbers might not correspond to the new list.

The last Christmas election was called by Stanley Baldwin in 1923, resulting in a hung parliament and eventual defeat for the Tories.

Mr Corbyn said last night: ‘Take No Deal off the table and we absolutely support a general election.’

Shadow home secretary Ms Abbott said the Labour Party needs an ‘explicit commitment’ that a no-deal scenario is ruled out.

She told the Today programme: ‘The Labour Party is definitely up for an election, but there are two things we need to know.

‘One is what sort of extension the EU is going to give and as you say we won’t know until Monday.’

Ms Abbott said they also want to hear from the Prime Minister that he will take no deal off the table.

‘But be in no doubt, party members, and the party as a whole, is ready for and keen for an election,’ she said.

Ms Abbott said the ‘explicit commitment’ ruling out no deal may mean further legislation in Parliament.

She also said offers from Mr Johnson are ‘not worth the paper they’re written on’.

Ms Abbott added: ‘The December day is a ludicrous day. We’ve not had a general election at Christmas for over a century, and there’s good reasons for that.’

The SNP, Liberal Democrats and Plaid Cymru, all roundly refused to give their backing to the Mr Johnson’s plan.

Dominic Grieve, one of the 21 MPs exiled from the Tories by the PM, also said he would not back the election plan, describing to BBC’s Newsnight as a form of ‘blackmail’.