A draft law implementing the Council Directive (EU) 2018/822 of May 25, 2018 (DAC 6) regarding mandatory exchange of information in the field of taxation in relation to reportable cross-border arrangements has been submitted by the government to the Luxembourg parliament.

As expected, the wording of the draft law largely resembles the wording of DAC 6 and the commentaries to the draft law provide few explanations on how it will be interpreted and applied in practice. Therefore, some of the rather vague terms and concepts used in DAC 6 will continue to give rise to uncertainty and will require interpretation.

The investments and business activities of Luxembourg companies often have a cross-border dimension. In these cases, the question needs to be answered whether a particular piece of advice, or involvement in implementation, is reportable. This article provides a clear and concise overview of the new mandatory disclosure regime and the mechanism that triggers reporting obligations.

What Type of Arrangements Will Need to be Reported?

Under the draft law, EU tax intermediaries such as tax advisers, accountants and lawyers who design and/or promote tax planning schemes will have to report potentially aggressive tax planning cross-border arrangements to the tax authorities.

Certain hallmarks must fulfill a main benefit test (MBT). The draft law provides that this test will be satisfied if “it can be established that the main benefit or one of the main benefits which a person may reasonably expect to derive from an arrangement, having regard to all relevant facts and circumstances, is the obtaining of a tax advantage.”

What Hallmarks are Used to Determine Reportable Cross-border Arrangements?

Hallmarks are divided into two categories: generic and specific. Generic hallmarks target features that are common to promoted schemes, such as the requirement for confidentiality or the payment of a premium fee. Generic hallmarks can be used to capture new and innovative tax planning arrangements as well as mass-marketed transactions that promoters may easily replicate and sell to a variety of taxpayers.

Specific hallmarks are used to target known vulnerabilities in the tax system and techniques that are commonly used in tax avoidance arrangements such as the use of loss creation, leasing and income conversion schemes.

The draft law follows the logic of DAC 6 and sets out the following five categories of hallmarks:

What is the Main Benefit Test?

Many of the hallmarks set out in the annex to the draft law are subject to an additional threshold test. This means that many of the hallmarks only trigger a reporting obligation when an arrangement meets the MBT, reducing the risk of excessive or defensive filings. This should enhance the usefulness of the information collected because the focus will be on arrangements that have a higher probability of truly presenting a risk of tax avoidance.

As mentioned above, the MBT is fulfilled if “it can be established that the main benefit or one of the main benefits which, having regard to all relevant facts and circumstances, a person may reasonably expect to derive from an arrangement is the obtaining of a tax advantage.” Hence, this test compares the value of the expected tax advantage to any other benefits likely to be obtained from the transaction.

According to the Final Report on BEPS Action 12, the MBT sets a relatively high threshold for disclosure. In practice, arrangements may not meet the MBT if the taxpayer can demonstrate that the value of any tax benefits was incidental when viewed in light of the commercial benefits of the transaction as a whole. Moreover, cross-border arrangements are generally taxpayer and transaction specific and not widely promoted as domestically marketed schemes.

It is interesting to note that the draft law (in accordance with DAC 6) explicitly states that the tax treatment of a cross-border payment at the level of the recipient cannot be the sole reason for concluding that an arrangement satisfies the MBT. Thus, it does not matter per se (i) if the jurisdiction of the recipient of a payment does not impose any corporate tax or imposes corporate tax at a rate of zero or almost zero rate, or (ii) if the payment benefits from a full exemption or a preferential tax regime.

How are Reportable Cross-border Arrangements Determined?

When determining whether advice on a particular arrangement is reportable under the mandatory disclosure regime, it is first necessary to analyze whether the arrangement has a cross-border dimension, and then whether one of the hallmarks is present.

When at least one of the hallmarks is fulfilled, it is necessary to verify whether the hallmark is subject to the MBT. If this is not the case, there is an automatic reporting obligation under the mandatory disclosure regime. When the hallmark is subject to the MBT, it is necessary to perform a comprehensive analysis of all relevant facts and circumstances in order to determine whether the main benefit or one of the main benefits was the obtaining of a tax advantage.

Given that many of the hallmarks and the application of the MBT require a good understanding of international tax law and some kind of judgement, the analysis of potential reporting obligations under the mandatory disclosure regime is generally not the role of a person with a risk management profile but requires the involvement of a person with a tax background.

The analysis to be performed is depicted in the checklist below: 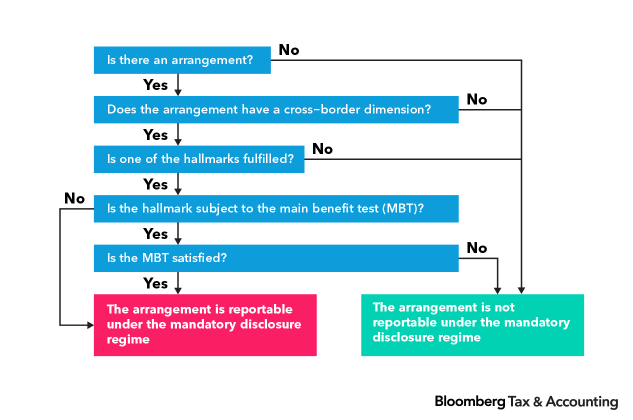 Which Information Will Need to be Reported?

If a cross-border arrangement is treated as reportable under the draft law, the information to be communicated to the Luxembourg tax authorities shall contain the following, as applicable:

The information reported under the draft law to the Luxembourg authorities can be used for taxation purposes, for tax collection purposes and for the verification of the Common Reporting Standard (CRS) reporting duties.

Who Will be Subject to Reporting?

An “intermediary” is defined as any person that designs, markets, organizes or makes available for implementation, or manages the implementation of, a reportable cross-border arrangement. This may include, in particular, tax advisers, lawyers and accountants. The draft law further extends the circle of intermediaries to “any persons that know, or could be reasonably expected to know that they have undertaken to provide, directly or by means of other persons, aid, assistance or advice with respect to designing, marketing, organizing, making available for implementation or managing the implementation of a reportable cross border arrangement.” Accordingly, the understanding of the term “tax intermediary” is very broad and includes any professional that provides tax advisory services.

Thus, it does not suffice to prove that another intermediary has committed to do the reporting: it is necessary to prove the effective reporting by another intermediary. This obviously requires a certain extent of coordination between advisers in order to determine whether or not a cross-border arrangement is reportable and, if so, to ensure that only one intermediary files a report so as to avoid multiple filings in relation to the same arrangement.

Likewise, when there is no tax intermediary because, for instance, the taxpayer designs and implements a scheme in-house, the reporting obligation rests with the taxpayer who benefits from the arrangement.

Who Will Have the Right to Benefit From the Professional Secrecy Limitation?

When Will the Reporting Have to be Performed?

Intermediaries, or the relevant taxpayers, will have to report to the Luxembourg tax authorities within the following time limits:

The beginning of the reporting obligations is depicted in the following chart: 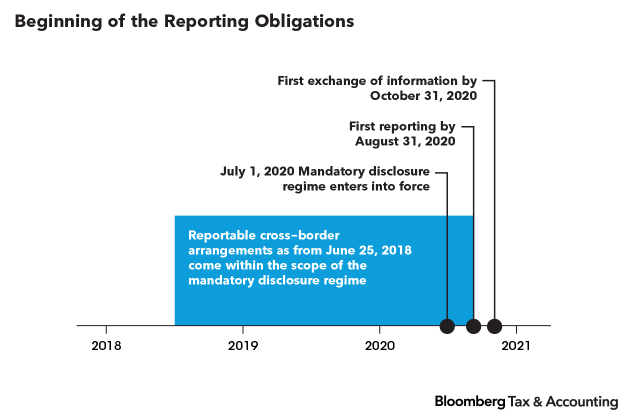 What are the Sanctions for Default?

The draft law introduces fines of up to 250,000 euros ($276,000) for intermediaries and taxpayers who fail to comply with their reporting obligations in Luxembourg. The maximum amount of the fines corresponds to the amounts applicable in cases of non-compliance with FATCA (the amended Law dated December 18, 2015), the CRS, and with the law dated December 23, 2016 on country-by-country reporting.

The Luxembourg tax authorities will verify whether tax intermediaries and taxpayers adopt a process for insuring compliance with the mandatory disclosure regime (Article 16 (1) of the draft law). Such mandatory disclosure regime process should ideally be formalized in a policy that may provide guidance for employees, set out responsibilities and consider practical aspects, such as how the reporting is managed from an operational perspective.

Based on experience, it can be assumed that the Luxembourg tax authorities will levy measured penalties in case of wrongdoing (for example, in case of CRS or FATCA reporting), taking into consideration the level of care taken by the tax intermediaries and taxpayers. When tax intermediaries and taxpayers use their best efforts and dedicate appropriate resources to the implementation of an MDR process (including training of staff) and its systematic application, there should be limited risk of penalties. However, in the absence of any efforts to comply with the MDR, it may be expected that Luxembourg tax authorities will levy penalties.

An appeal against the fine is available to the intermediary or to the relevant taxpayer.

The measures introduced by the draft law will now have to go through the legislative process (i.e. comments from the different professional Chambers and the Council of State, potential amendments, report of the budget and finance commission). The draft law should be voted by December 31, 2019 at the latest and the new reporting requirements should apply as from July 1, 2020.

Nonetheless, cross-border arrangements whose first step was implemented between the date of entry into force of DAC 6 (i.e. June 25, 2018), and the date of application of this draft law (July 1, 2020) will also be reportable by August 31, 2020. Thus, as expected, any cross-border arrangement designed and/or promoted since June 25, 2018 is potentially reportable under DAC 6, and intermediaries would need to take adequate measures in this respect.

With the draft law being released, tax intermediaries and taxpayers are now in a position to prepare themselves for the new reporting obligations. In this regard, it would be wise to allocate a person with a good understanding of (international) taxation to the task, develop internal guidelines and processes, train the staff involved and analyze potentially reportable cross-border arrangements as from June 25, 2018 to clear the backlog.

Ultimately, the mandatory disclosure regime may also be viewed as an opportunity to consider and emphasize the commercial reasons and business rationale driving international investments and business activities.

Oliver R. Hoor is a Tax Partner (Head of Transfer Pricing and the German Desk) with ATOZ Tax Advisers.

The author may be contacted at: oliver.hoor@atoz.lu

The author wishes to thank Samantha Schmitz (Chief Knowledge Officer) for her assistance.

This column does not necessarily reflect the opinion of The Bureau of National Affairs, Inc. or its owners