Do you remember what you were scared of when you were little?

Maybe it was just one or two things. Maybe you had a whole list of ‘em. But it’s a safe bet that monsters weren’t something you enjoyed.

I don’t know what it is about little kids’ brains that makes them worry about such things. Yet it seems universal nonetheless. At some early point in their cognitive development, children conjure up the idea that there’s something scary out there.

Worse still, it’s snuck into their houses to hide in their closets or under their beds…

It’s a mystery how such very big creatures manage to hide from moms and dads – every single time – when those parents go looking for them. However, children swear up and down that it does indeed happen.

As soon as those lights go off and the door gets shut, it doesn’t matter if the nightlight is on or not. Those monsters are coming out to play.

And they’re probably going to stop for a snack before the night is done. 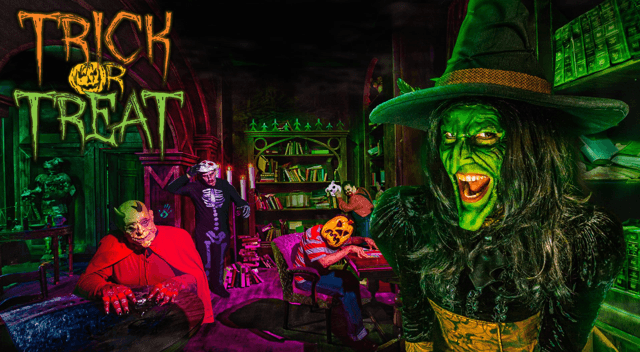 Monsters May Be Moot, but Don’t Laugh at Fear Itself

Why are so many little kids the world over so deeply afraid of things that go bump in the night? Fatherly.com says it has an answer to that question:

Not the most comforting first paragraph, I know. But let’s continue nonetheless:

“‘It’s no surprise that infants have some fear of the dark. Throughout our evolutionary history, the dark was dangerous,’ Peter Gray, a psychology professor at Boston College who has written about children’s innate fears, told Fatherly. Humans rely on vision about all other senses, Gray explains, and the dark placed us in acute danger for thousands of years. It follows that a healthy fear of the dark and the monsters that prowl at night is deeply ingrained in the human psyche.”

Of course, most of us don’t have to be literally concerned about lions and tigers and bears (oh my!) anymore. But that desire for and drive toward protection still stays deeply imbedded within our beings.

While it’s admittedly inconvenient to parents everywhere for their kids’ imaginations to take that fear and run wild, being cautious concerning forces that are bigger and badder than us is, overall, is something we should encourage.

When you stop and think about it, there’s a whole list of “monstrous” possibilities we really want to avoid. Otherwise, we end up putting ourselves in ridiculous amounts of danger.

Finding a Healthy Balance Between Fear and Greed

Did you hear about that woman? On Oct. 1, she managed to get into the African lion exhibit.

Judging by her behavior, once she was in, I don’t think she was suicidal. If I had to diagnose her problem – other than a complete lack of good sense – I’d say she didn’t have nearly long enough a childhood stint being afraid of monsters

Again, we’re supposed to be wary of certain things, lions included. They have sharp teeth and sharp claws and enjoy eating very rare meat, after all.

We’re also supposed to recoil when we see a swarm of bright red ants on the sidewalk. Or a rattling snake in our path.

Likewise, we’re meant to pause before crossing the street since we don’t want to be hurt. We all know this. It’s obvious.

It’s also obvious that we don’t want to lose money… despite how it seems like we’re far less wise in that regard. We’re so focused on making money – on being greedy, as the old Wall Street adage puts it – that we ignore our natural fears to the detriment of our portfolios and financial futures.

Obviously, “greed” has its place in the markets. We need that drive if our nest eggs are ever going to hatch and take flight.

We’re always operating in the big, scary dark to some degree since we can’t ever completely predict the future. And we can’t stay wrapped up under the covers our whole lives, trying to stay safe from bogeymen.

It’s just a matter of finding a healthy balance between bravery and caution. Otherwise, we might find ourselves saddled with some truly scary stocks. 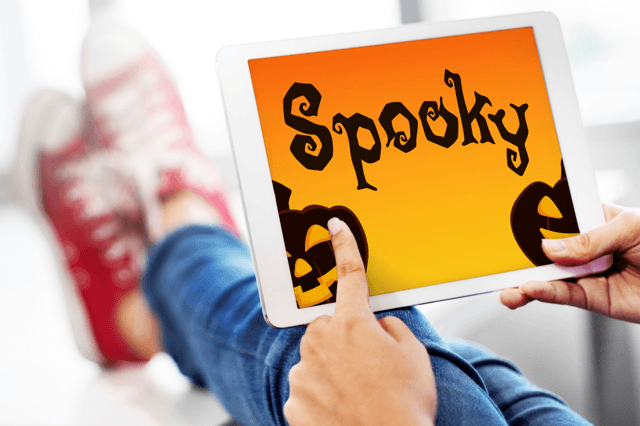 On the surface, GNL appears to be attractive. But upon further investigation, it seems that all that glitters isn’t gold.

For example, the company has around 53% exposure in office properties – which means it has higher capex costs when tenants vacate. Comparatively, the costs for releasing space is capital intensive, as new tenants require upfit allowances. Plus, leasing fees are typically a cost of business for third-party brokers.

As such, the lease maturity dates aren’t necessarily well laddered and there’s some rollover risk to consider.

My primary concern with GNL is its high cost of capital. It’s levered, with 48% net debt to enterprise value, and trades at a large discount to its peers.

Is Havoc Up Ahead?

Reviewing GNL’s latest investment deck, it appears it’s focusing efforts on industrial properties at an average cap rate of 7.91%. This provides the company with solid profit margins of around 140 basis points (bps). And it also extends lease terms out to an average 13.2 years for deals closed or under contract.

However, my concern is that the office exposure and looming rollovers could reap havoc into an already dangerous payout ratio. Similar to Lexington Realty (LXP), which was overweight in this area, GNL was pushing to increase its industrial exposure.

Ultimately though, it had to cut the dividend (as we predicted) in order to turn the corner.

Based on our model (and using F.A.S.T. Graph data), GNL’s payout ratio is 110%. And although analysts’ forecast growth of 7% in 2020, the company most likely won’t be able to increase its dividend.

In our estimate, it has to grow earnings by the same amount in 2021 to begin thinking about a dividend bump while also recycling the portfolio and rebalancing the lease maturity ladder.

And – not to beat a dead horse – don’t forget that GNL owns 53% in office space. That makes it much more susceptible to a dividend cut, since there’s virtually no cushion against unexpected vacancies.

It’s important to recognize that GNL looks more like an office REIT than a net lease REIT. We believe there are better options for income with much less risk to be found out there. 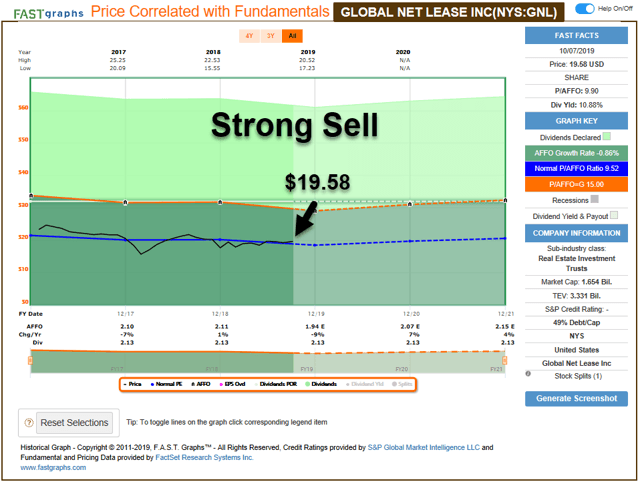 Some Treats but, Sadly, More Trick

Washington Prime (WPG) is another spooky REIT that has all the ingredients of a sucker yield. Its current dividend yield is 25.8% with a payout ratio of 138%, based on our estimates.

We’ve got to give credit where credit’s due, so let’s acknowledge how its balance sheet is actually in decent shape. And we credit management for taking initiatives to manage capital flows and generate solid leased results. (It had 2.1 million square-feet leased as of Q2-19).

All the same, we believe the potential for a dividend cut isn’t yet priced in.

I really do admire management for using every tool at its disposal – from outparcel sales to ground lease sale-leasebacks (with an initial yield in the mid-7% range) to property refinancing efforts – to keep its dividend above water.

The company continues tossing keys back to a few lenders. But there’s clear signs of liquidity that exists with its unsecured portfolio (56% of total NOI).

Washington Prime’s slogan – “Grind It Out” – also is admirable. And it’s clear the company is doing everything in its power to keep its $1 dividend afloat. However, its previous management team caused a lot of the current problems, such as the preset dividend distribution (of $1.00 per share).

It’s true that I was once a shareholder in WPG. Back then, the payout ratio was around 60% (based on AFFO) and the dividend yield was closer to 10%.

But back then… who would have guessed that Sears would fade, Bon-Ton would die, and Toys-r-Us would shutter?

The new reality is that there are hundreds of malls destined to eventually close down and/or be demolished. While WPG does own some malls that will make the cut, chances are it also holds some doomed centers too.

(Though that doesn’t mean these duds are completely worthless. I’m convinced there’s value with adequate capital for redevelopment.)

The latest Forever 21 news is that around 180 stores could close, with WPG holding eight of those at-risk locations. It appears that the pace of retail store closures in general is increasing and this will likely put added pressure on WPG’s dividend.

In my opinion, WPG’s management team should address the payout ratio in detail during the upcoming earnings call. And instead of financial engineering via sales/leasebacks (of land under the malls) that are considered debt – it should just get it over with and prepare to cut the dividend already.

We’d like to see it create a C-Corp spin vehicle where it could hold the lower-quality malls and then merge with CBL’s ugly ducklings. The “new” WPG (rename it something like Great American Mall REIT) could then reverse-merge the higher-quality malls to trade in-line with Simon and Taubman.

The spin-co model has worked effectively for DDR (DDR), Spirit Realty (SRC), and Ventas (VTR) so far. And we believe this could be the best solution for WPG, CBL and PEI as well.

For now, we see no sensible capital for WPG. That’s why we’re maintaining our Strong Sell recommendation. 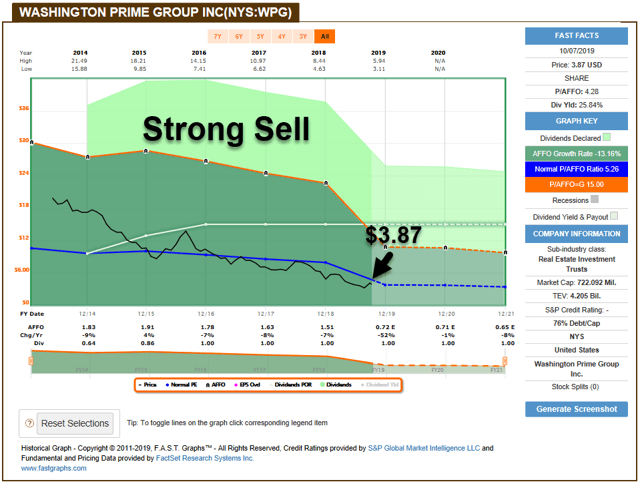 Stay tuned for my upcoming article, Trick or Treat, My Favorite REITs.

Author’s note: Brad Thomas is a Wall Street writer, which means he’s not always right with his predictions or recommendations. Since that also applies to his grammar, please excuse any typos you may find. Also, this article is free: written and distributed only to assist in research while providing a forum for second-level thinking.

If You Want Endless Income, You’re In The Right Spot

Our marketplace service, iREIT on Alpha, offers the most comprehensive REIT research with a dedicated team of 5 experienced analysts (100+ years of experience). Our research is powered by qualitative data analysis that provides a decisive edge to achieve superior portfolio results. 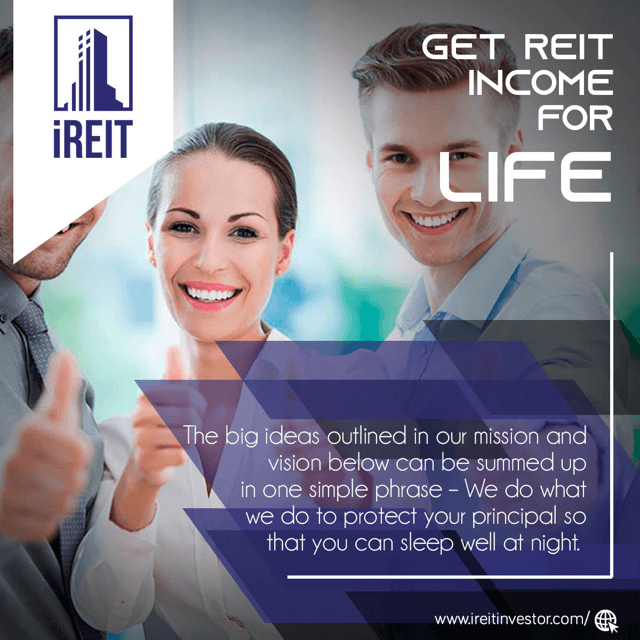 Our secret sauce is our proprietary RINO scoring model (REIT Indicator Numerically Optimized) that analyzes critical REIT metrics. We offer real-time macroeconomic analysis and commentary you can apply to your portfolios and we’ve discounted the introductory price by 10% (a $60 value) … Act Now to Start Your 2-Week Free Trial!

Disclosure: I/we have no positions in any stocks mentioned, and no plans to initiate any positions within the next 72 hours. I wrote this article myself, and it expresses my own opinions. I am not receiving compensation for it (other than from Seeking Alpha). I have no business relationship with any company whose stock is mentioned in this article.